A problem, facing a large beverage manufacturer, was the installed network operating at the plant, connecting the equipment on the production line.  The approach that had been adopted was a hodgepodge that had grown with the plant.  This resulted in the existence of multiple lines on a single network, an arrangement that worked for a while but clearly was not the best practice going forward. For instance, an obvious limitation was the availability of IP addresses and outages to several lines due to unrelated machine issues on the shared network.  New sub-networks were created to accommodate additional lines, but the problem remained in that the original network still serviced multiple different lines.

Process and Data Automation (PDA) was hired to reorganize the existing network and to isolate this equipment from other networks. This required PDA to work with the Client’s IT team to define the new architecture, installers to provide new media (creating a new physical network), and other OEMs to provide the client the correct hardware and programming to meet the client’s new corporate standards.

PDA engineers initially undertook a pre-planning phase, a type of network architecture overview.  The preplanning phase involved choosing and assigning IP addresses for each of the machine centers based on the new machine orientation.  PDA engineers worked with the key stakeholders (Client, contractors, and OEMs) to provide a roadmap leading from the singular, overlapping network to independent networks for the new, independent lines.  That the company intended to simultaneously move an entire network proved to be advantageous since it allowed the rearrangement of things.

The selection of IP addresses followed a pattern that was logical to the actual flow of the line, i.e., machines at the beginning of the line would go to the top of the IP address range.  Much of this work utilized an Excel spreadsheet and was done with the technical knowledge of what the IP addresses represented and how they were to be used.  PDA engineers went on site to use the new IP addresses that had been selected.  This involved accessing the machine centers to reconfigure them to use the new IP addresses.  This did require updating not only hardware addresses in network equipment-line network switches, PLCs, HMIs, and gateways. Machine logic for communications also needed to be updated as messages between machinery followed new paths. As needed to assist the Client in meeting its new standards hardware was replaced.  This resulted in the need to commission the new switches on this new network.

A significant challenge to the work arose from the fact that the company was completing physical changes to the line while PDA was disentangling the IP addresses.  For example, the equipment from one line was disassociated with its former line and reused on the second while needing to minimize downtime.  This interfered with the ability of PDA to focus on just one line, and it became necessary to consider both lines since changes were occurring simultaneously.  A further challenge arose with the changing of some switches, for which the available documentation did not match the actual reality.  It was found that for some older switches it was necessary to reset them before changes could be made.  PDA corrected the documentation where it was necessary, i.e., when it did not match reality, and labeled the equipment to simplify further work on the network.

PDA engineers successfully untangled the lines and networks, taking it all back to its’ roots and rebuilding to give better isolation between the systems.  The changes made by PDA have represented a significant improvement, providing reliability, and eliminating any dependency of one line upon another.  The operation of the machines has also improved.  From the standpoint of administration and management, the changes realized an improvement due to the clear separation of the lines.  Future upgrades would be to improve operator visibility, possibly deploying a comprehensive level package SCADA or MES.

The next entry in our Digitalization Digest, articles and thoughts regarding manufacturing plant digitalization, focuses on a project for an international manufacturer of private label food and beverages across North America and Italy for retail grocery, food service, and industrial customers.

Limited production capacity, due in part to an obsolescent network within the plant, had become a major problem. Process and Data Automation (PDA) commissioned and tested the production equipment, as well as evaluated and programmed the control network which included PLC and HMI work. During the evaluation step, it was established that the existing pumps in the plant and their VFD controls were unable to meet production needs and should be replaced. In addition, the existing controls operated on DeviceNet, a system that the plant had already decided to phase out, represented a further limitation.

PDA recommended the installation of an Ethernet control system with retention and careful use of the existing legacy PLC processor. Upon further discussion and evaluation, it was then determined that network evaluation, together with a segregation strategy, was essential to ensure that the increased traffic from the new equipment would not interfere with other operations in the plant. PDA provided the engineering and hardware for the PLC programming to integrate two new SPXFlow Universal TS series pumps and replace two Powerflex 40 drives with Powerflex 525 drives.

During the project, problems associated with merging new technologies with the aging infrastructure were successfully overcome by being able to provide the plant with a more modular system, as well as the capability to meet the production demands.  Also, by using the approach of retaining functional legacy equipment, the overall cost of the project was significantly reduced.

Overall, the changes to the plant simply represented an upgrade to the existing processing system and replacement of the older controls that had operated at a lower feed rate. The new equipment provided enhanced diagnostic capabilities that allow both tracking and recovery of data. PDA discussed with the client the need for future improvements in the plant, including:

PDA is a full-service, CSIA Certified industrial control systems integration firm. The Controls Engineering group specializes in physical automation system design, programming, and commissioning. PDA also features a dedicated Digitalization Group (DSG) that connects automated equipment and systems to the business system environment including protected recipe systems, data collection and reporting, and data historian implementation. DSG can provide the systems you need to set your systems up for proper operation and then provide the tools you need to make sure you execute as planned. 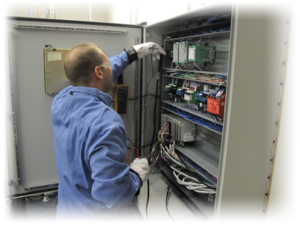 Process and Data Automation (PDA) provided engineering expertise for a conveyor controls project at a beverage company based in the Great Lakes region. This expertise was directed at the design and implementation of new programming of the OEM and plant provided PLC, HMI and motor controls in order to integrate the plant’s existing processing systems and conveyors into a new line configuration with OEM controls. The client requested that the motors be controlled by new Allen-Bradley Power Flex 525 Series VFDs communicating via ethernet, within new control panels designed and built by Krones Inc.

The engineering group at PDA provided the labor necessary to write the controls code that was integrated with the PLC supplied by Krones. While the PLC and HMI code was what the project required, what was necessary was this and additional, engineering for the final design and project administration to incorporate the needs of both client and OEM.

The project was organized for PDA to provide engineering to coordinate and control the existing conveyor and machine centers that were necessary for the operation of the bottling line, and where the existing centers had not been upgraded. This involved blending equipment from multiple manufacturers into a functioning system, coordinating installation, start-up and runout testing between multiple trades. In addition, PDA acted as a resource to both the equipment supplier and the end-client to triage and resolve issues that were outside the scope of one single party. This role was essential in this project because PDA acted as the glue or connection between the new machine centers provided by Krones, and the original hardware installed in the plant. The involvement of PDA allowed the other parties to focus on their core responsibilities.

The solution provided by PDA has led to increased throughput, a more modular system, and reduced project costs. The integration of the OEE data from the machine centers into the line information system (LIS) now allows data to be readily obtained or tracked by the end-client.

Future upgrades the end client is considering are: